Posted at 11:58h in Uncategorized by Barb Anderson 0 Comments

Some industry gurus are questioning whether the housing momentum we saw early in 2013 began to dissipate later in the year. The more dramatic have claimed the housing sector is still on shaky ground. Others have blamed the slowdown in sales on a lack of consumer confidence or rising interest rates.

The National Association of Realtors (NAR) just released their 2013 4th Quarter Housing Report. The report revealed that home sales numbers barely outperformed (an .08% increase) those in the 4th quarter of 2012.

We believe the leveling in home sales is directly attributable to a lack of salable listing inventory; specifically in the West. 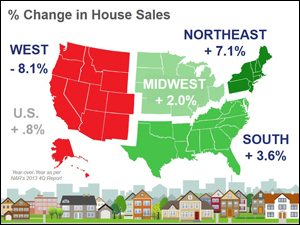 Three of the four regions in the NAR report had an increase in sales: Northeast (+7.1%), Midwest (+2%) and South Regions (+3.6%). A big fall-off in sales occurred in the Western Region. The dramatic fall-off in the West (-8.1%) can be directly linked to a shortage of inventory in their hottest markets.

If the decrease in sales was caused by an eroding of consumer confidence and/or rising interest rates, we believe each region would have seen similar decreases.